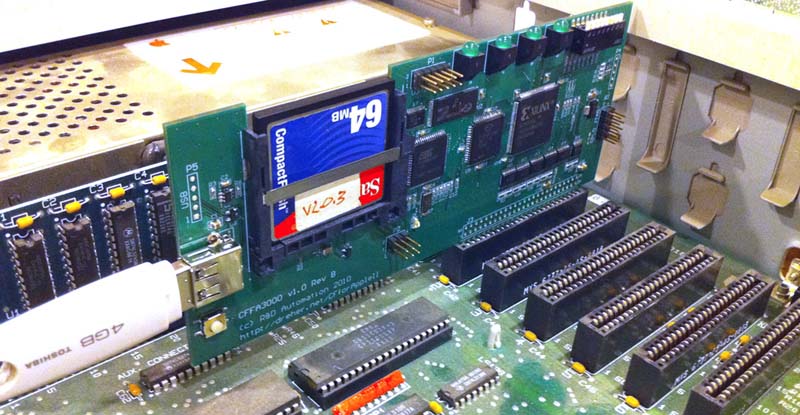 The CFFA 3000 was developed by Richard Dreher and is an absolutely fantastic piece of hardware. It acts as a hard drive for the Apple II and uses either a CompactFlash card or USB flash drive to store the ProDOS partitions. Partitions are easily created using CiderPress or other means and then transferred to the flash card where they boot like a normal ProDOS hard drive partition. But what about CP/M operating systems?  Can a CP/M operating system be made to boot from the CFFA?  The answer is yes if you encapsulate the CP/M system inside of a ProDOS partition. Thankfully Steven Hirsch of Applicard fame did just this many years ago and his guides on creating a bootable CP/M hard drive partition along with a Z system, like NZ-COM, work fine with the CFFA with only a few alterations.

The following procedure works for Apple II computers that have a PCPI Applicard/Starcard.

1. Instructions for Creating Your Own Dual ProDOS & CP/M Partition for the PCPI Applicard (Easy Method)

Included here are two complete Z systems ProDOS partition files for the CFFA 3000 I built a few years ago.  If you really want to have some fun, I recommend rolling your own partition from scratch (see #2 below).

The ready-made partitions that boot into ProDOS and then allow you to boot into NZ-COM or ZCPR3 are located here.  Just copy the .po file over to your CFFA card and enable it in the CFFA menu settings.  After booting into ProDOS, type -PCPIBOOT and CP/M will boot.  If you are prompted to enter a suffix number, select ‘2’.  For the nzcm32mb.po image, I byte-hacked the PCPIBOOT binary to automatically select 2.

Partition Notes:  Type PWD to see a list of all the directories available.  Most of the popular file archiving utilities, assembly language compilers, some games, etc. are already on the partition. Don’t forget to look at higher user numbers like A15: (type, ‘A15:’).

2. Instructions for Creating Your Own Dual ProDOS & CP/M Partition from Scratch for the PCPI Applicard:

I’ve taken Steven Hirsch’s original instructions and consolidated them into a single step-by-step guide while adding a few updates for the CFFA3000.  Credit goes to Steven for the bulk of this guide.

A. Creating the ProDOS Partition

We are going to create a 32MB ProDOS HD partition that has 16 MB dedicated to ProDOS and 16 MB for CP/M.  The Apple will always boot into the ProDOS partition, then you will be able to launch the CP/M partition by typing -PCPIBOOT at the ProDOS prompt.

B. Creating the Floppy Disk Images to Configure the HD Partition and Adding CP/M

Next, you need to transfer the three .dsk images: propart_cpm.dsk, cpmhd1_cpm.dsk, and pcpi_dos.po from the .zip file above to Apple II floppies using ADTPro or something similar.  There is a fourth CP/M .dsk image in the .zip file named pcpi_clks.dsk.  You only need this disk image if you want to install clock driver support for a no-slot clock or serial port clock in CP/M.  I’m going to install a driver for my Timemaster clock card, which is already included on propart.dsk.  I’m also going to install additional driver support for a RAMWorks with a RAM drive.  If you don’t have a clock card or RAMWorks, just skip the non-applicable steps below.  Note: the other clock drivers are stored in an .LBR archive so you need NULU or something to unarchive them.

Choose the system to be created:

If all of this perhaps proved a bit too daunting, there is a bare-bones HD-bootable partition that encapsulates everything done up to this step in the PCPICPM HD Bootable sub-folder of the main .zip file.  Just drop it on your CFFA.

You may also want to copy over the default CP/M files and other utilities from the Applicard system disks.

In the next article, I will show how to load the NZ-COM OS on top of CP/M and get time card support working.  NZ-COM is a very nice enhancement of basic CP/M.

Good luck and have fun,