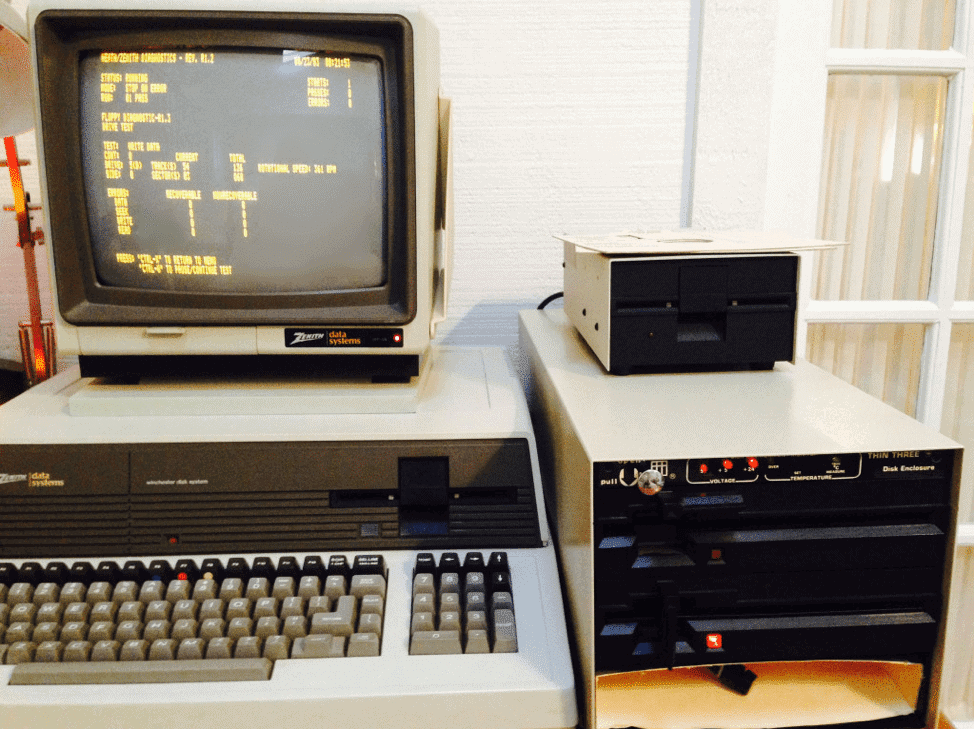 When I first powered up the Z-100 for testing, everything worked except one of the 8″ disk drives, a Tandon TM848-1E.  The drive light would make three short flashes, then one long flash and was not detected by the OS (neither CP/M nor MS-DOS).  The Tandon manual didn’t list this particular blink sequence error, so I was on my own with diagnosing the problem.   I thought perhaps the stepper motor might be stuck.  Being the second drive of an old 8″ drive system that was in itself part of a hard drive, dual 5 1/4″ drive, dual 8″ drive system made it likely that this drive probably hadn’t seen any activity in at least 25 years.  Since I was going to be disassembling the Thin Line anyway, I decided to give the whole drive system a thorough inspection. 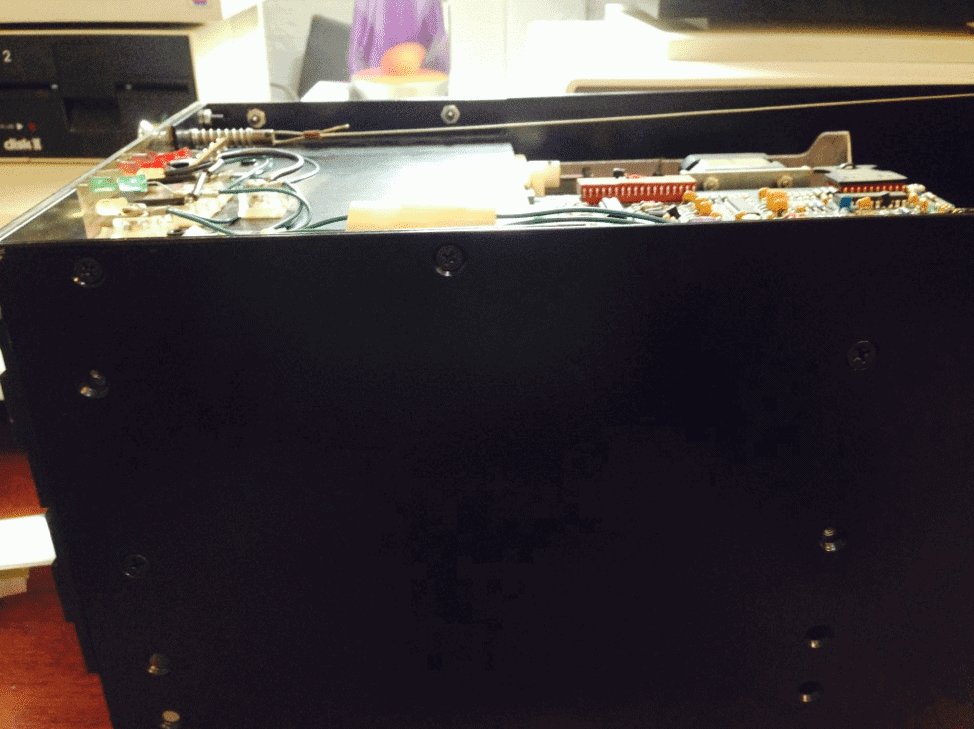 Opening up the Thin Three drive caddy (thin is not a word I would use for this beast) is interesting.  Do you see that long cable at the upper part of the above picture?  The cable leads to a knob and you pull the knob which lifts a spring-loaded pin underneath at the base of the caddy allowing you to slide the entire enclosure out of the white exterior housing.  A cursory inspection of the drives didn’t show any blown caps or burned out parts.  The jumpers were set correctly with the top drive set to S2/DS1 and the bottom drive set to S2/DS2 as they should be. The terminator chip was also correctly installed on the lower second drive (empty terminator socket shown on top drive here).  Eight-inch drives require both 24-volt and 5-volt power which is the reason they are mounted inside this drive caddy which has its own AC power supply.  I double checked the voltages and these checked out as well. 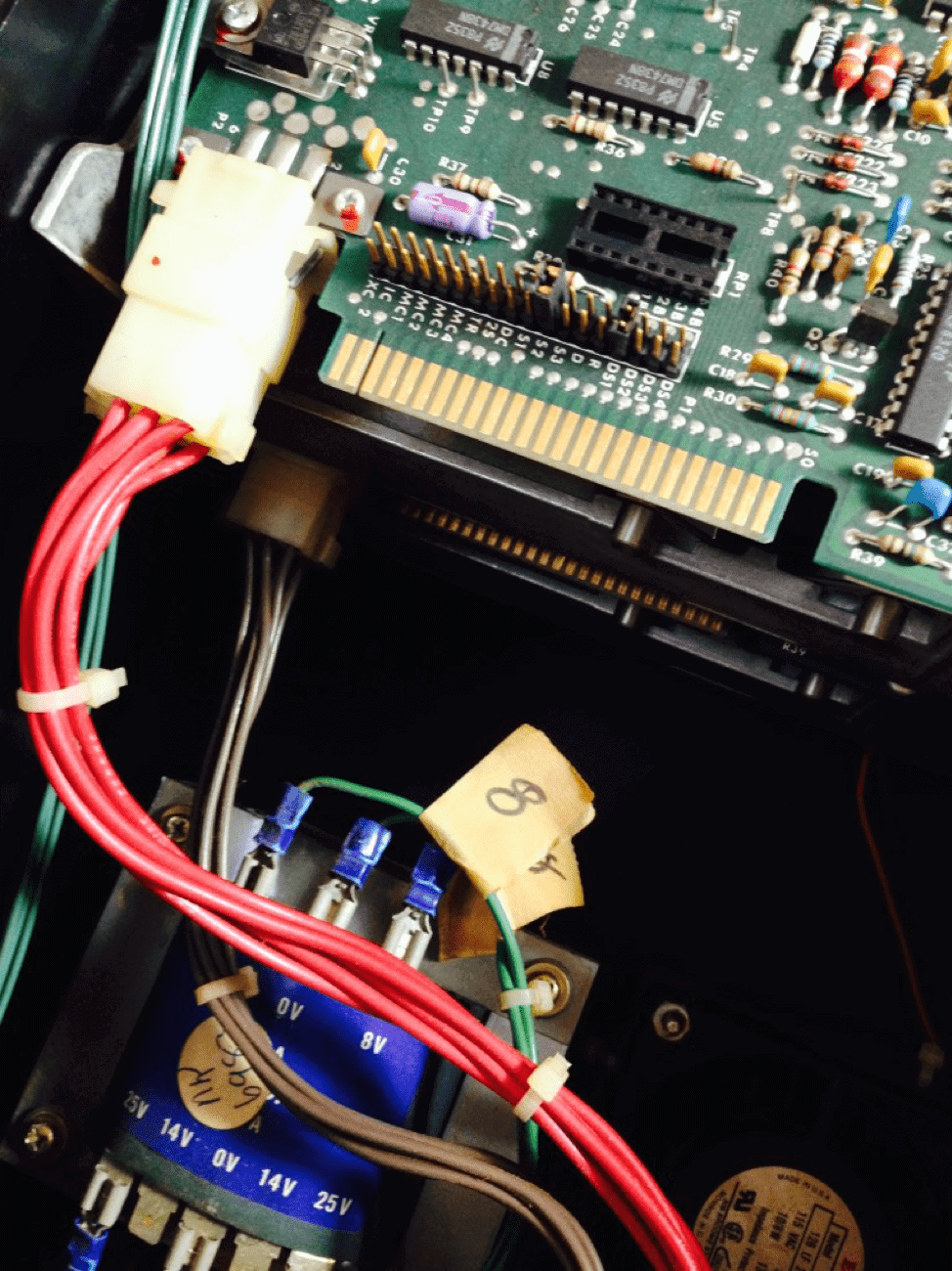 I then thoroughly cleaned both drives and gave the stepper motor on the malfunctioning drive a little bit of a nudge to see if maybe it had just seized up over the decades.

After putting things back together, I powered up the drive system and both disk drives sprang to life!  A few diagnostics tests verified perfect functionality. The Z-100 is now 100% functional!

Next up: Figuring out how to link the Z-100 to a Mac with a serial cable…